A MORNING AT SUNSHINE COAST 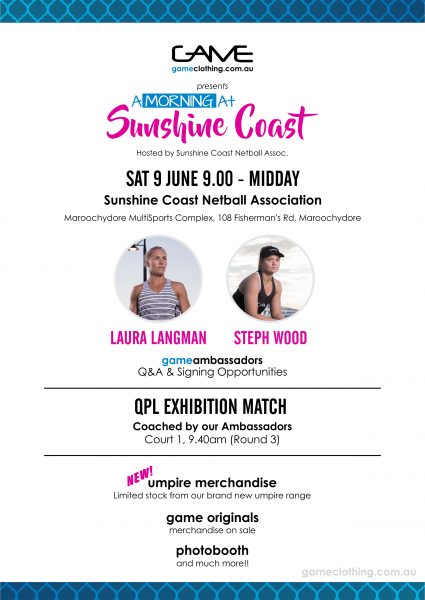 Hosted by Sunshine Coast Netball Association, Laura and Steph will be Guest Coaches during a QPL Exhibition Match during Round 3 of Saturday morning fixtures as well as holding a Q&A with fans, signing autographs and taking selfies.

‘GAME Umpires’ go on sale from 9am at gameclothing.com.au with limited ‘GAME Originals’ and ‘GAME Umpires’ stock on sale at the event.

We are pleased to announce the beginning of GAME Originals. Our fitness range that has you covered for all types of training.

Conceptualised by the demand of our customers, we have created an innovative “Originals” range purposefully designed to motivate, train comfortably, look great and support healthy lifestyles.

The opportunity to inspire and encourage individuals to feel confident when participating in exercise is what we are all about!

GAME are excited to launch the first release of our high quality, affordable, locally made fitness range; GAME Originals.

Stephanie Wood – a Netballer on the Rise

Stephanie Wood is a young netballer on the rise. At just 22 years of age, the born and bred Queenslander is keen to take the next step in her netball career.

Stephanie began playing netball at age 6, following in the path of her two older sisters.

She first represented Queensland in U/17’s in 2008 before moving into the U/19’s team the following year.

In 2010, she helped guide the Queensland U/19’s team to a remarkable National Championship win and she was awarded the San Remo Most Valuable Player award. In the same year she began a scholarship at the AIS.

In 2011 she was awarded the coveted Gweneth Benzie Award – a prestigious honour given to an AIS netballer who displays all the attributes to one day represent the Australian Netball Diamonds.

“Having the honor of receiving the Gweneth Benzie Award at the AIS in 2011 was very special to me, it’s the only trophy I have on display in my room.”

Stephanie says her greatest achievement to date was representing the Australian U/21’s team in New Zealand in 2011. Here she played a key role in the goal circle and helped Australia claim a series win.

From the National U/21’s team and captaining Queensland in underage competitions, Stephanie has successfully progressed into the senior pathways and has learned some valuable lessons along the way.

“Playing at an elite level has definitely taught me that not everything comes easy like it did when I was younger and that sacrifices have to be made for me to reach my goals. Also, it’s taught me how important time management is.”

Stephanie has developed into one of Queensland’s most reliable and consistent performers and is working hard to catch the eye of the powers that be at the elite level. She’s currently busy training and playing for the Queensland Fusion in the Australian Netball League and has been used as a replacement player and training partner for the Queensland Firebirds.

Stephanie is a dedicated, determined and passionate netballer with a bright future in the sport. She’s an accurate shooter renowned for her creativity, court craft and knowledge of the game. She has speed to burn and a maturity and poise beyond her years.

Stephanie currently works for GAME clothing and will be at the NQ merchandise store at State Championships in Townsville. She’s can’t wait to see all the representative players from around the state in action.
Story by Dan Ryan

The Indoor Netball Federation of Queensland are currently running the Junior State Champs (22nd – 25th September 2011) at Ipswich Indoor Sports. Hundreds of junior indoor netballer’s will be striving to be the best on the Netball court to both perform well for their team, as well as, possibly being named in the INFQ Allstar teams.

GAME Clothing will be there with an exciting range of INFQ merchandise. This is the first time INFQ has had such an extensive range of its own merchandise for the Junior Championships, so if you are there supporting a team, why not also visit the merchandise shop and support INFQ as well? 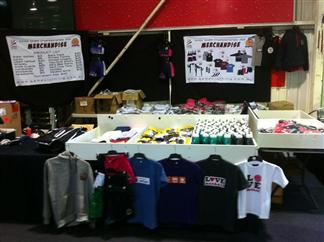 More on our extensive range of netball gear.